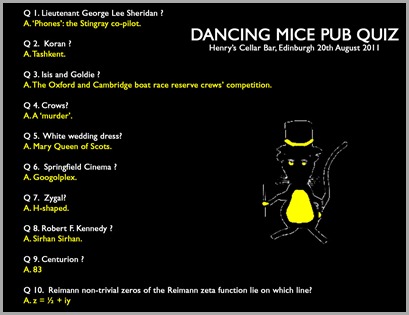 Setlist: A Physical Husband, Death Makes You Feel Like A Man, (We Were) Always On Our Own, Watching Waters Rise, The g Factor, Four Times On The Floor, Cool, It's Abnormal, Selling The Party, Blue Screen
Sound: Leonora. Great soundcheck but worst ever on stage when playing. Good front of house though.
Reception: Warm, relaxed.
Featured the first Dancing Mice Pub Quiz viz:
Q 1. By what name is Lieutenant George Lee Sheridan better known? A. ‘Phones’: the Stingray co-pilot.

Q 2. In which city is the oldest copy of the Koran housed?
A. Tashkent.

Q 3. In which annual event do Isis and Goldie compete? A. The Oxford and Cambridge boat race reserve crews’ competition.
Q 4. What is the collective noun for a group of crows.
A. A ‘murder’.
Q 5. Who was the first famous woman to wear a white wedding dress? A. Mary Queen of Scots.
Q 6. What is the cinema called in Springfield (the Simpsons’ town)?
A. Googolplex.
Q 7. If something is described as zygal, what does it look like?
A. H-shaped.
Q 8. Who shot and killed Robert F. Kennedy (John F. Kennedy’s younger brother)?
A. Sirhan Sirhan.
Q 9. How many soldiers was a centurion in charge of?
A. 83
Q 10. According to the Reimann hypothesis the non-trivial zeros of the Reimann zeta function lie on which line?
A. z = ½ + iy
Posted by amoffoot at 04:10 No comments:

Posted by amoffoot at 18:04 No comments: